Reflecting on the Past 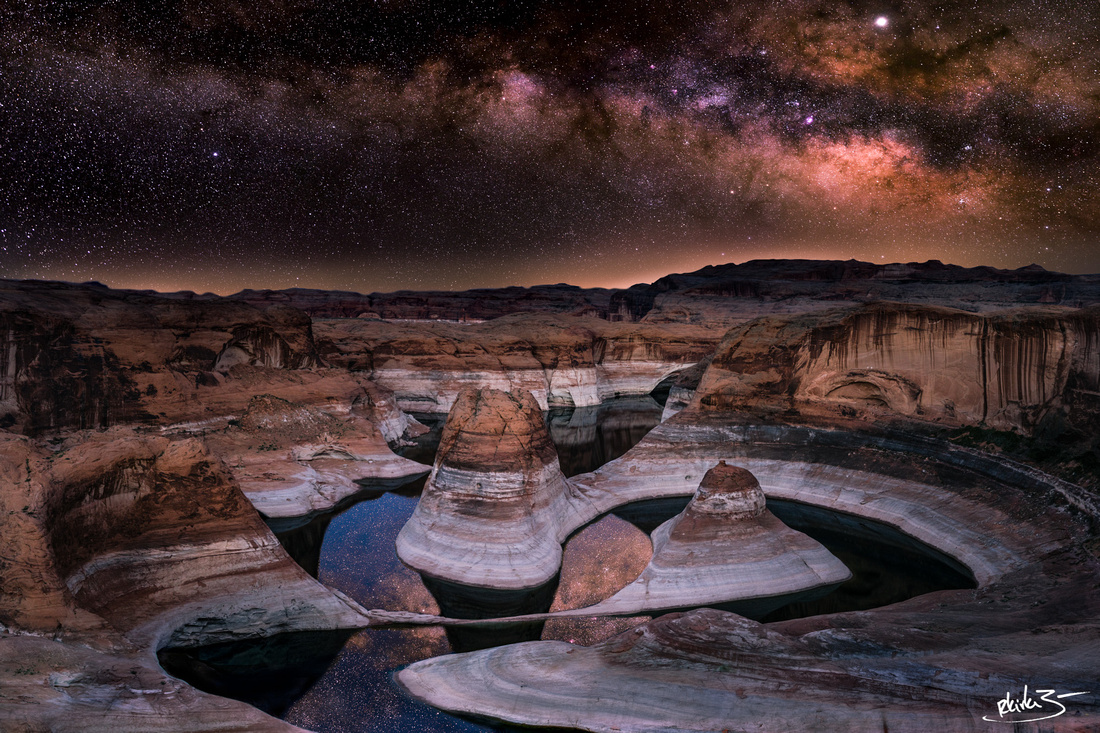 Reflecting on the Past | Lake Powell, Utah

The first weekend in May I made a trip to Lake Powell with another photographer friend for the express purpose of capturing the Milky Way as it spans across this gorgeous canyon.  I planned the trip around a new moon and hopefully clear skies to capture the splendor of the galaxy spanning the canyon.  To get here you have to hike 9 miles across the open Southern Utah desert; no shade and no water.  This normally isn't such a big deal, but the addition of heavy camera gear like lenses, tripods, and the camera itself, along with packing in all the water you need for 2 days, increased the difficulty.  7 miles up and down the foothills of a nearby cliff, and 2 miles across ankle bending, knee straining, blister causing, open slickrock.

I arrived tired and somewhat dehydrated but in good shape.  Pictures don't accurately show how massive this canyon is or the rock formations in it, which have to be at least 200 feet tall.  After setting up camp and getting some much needed rest and food, I began scouting for a good viewpoint to capture the unique maze of water snaking around these sandstone sentinels.  The water level is pretty low this year, so we got to see the spine of rock going from one cliff slope to one of the center rock towers.  This is not photographed very often and it was nice to get a little more unique of a photo.  Upon finding a good composition, I snapped a few photos a little after dusk during what's called the "blue hour."  This is the very last bit of light to reach the landscape as the sun plummets further and further below the horizon.  This cool, calm glow allows for crisp, detailed photos of the foreground while maintaining a nighttime feel.  Now it was time for bed.

At 2:31am my phone's alarm chimed, alerting me to the imminent rise of the Milky Way to the perfect position in the sky.  I got up, got dressed, and grabbed my camera and tripod.  For this shot, I also brought my star tracker, a (heavy) device that counteracts the rotation of the Earth, allowing for very long exposures of the nighttime sky.  I have to align the North Star in a circular grid based on latitude, time of day, and time of year.  There is lots of complicated math necessary for this.  So it's fortunate that I have an app on my phone that does all that for me and just tells me where to put the North Star in the illuminated grid in the  star tracker's viewfinder.  But man, that little star has to be lined up just so and the adjustment screws on the tracker are so finicky...

Now with the star tracker lined up and slowing spinning in the opposite direction of the Earth, I can take very long exposures of the Milky Way, several minutes or longer, without getting star trails.  The primary benefit to this is increasing the "signal-to-noise ratio" which is the amount of light collected by the camera versus the amount of random pixels generated by heat from the camera sensor or imperfections in the way the data is processed.  Basically, the more signal (light) I can collect, the better the image will be able to give me clean, crisp, details.  Another benefit is the ability to zoom into the Milky Way to gather a clearer picture of the tiny cracks, eddys, and nebulae in the massive cloud of stars.  A common misconception for landscape photography is to zoom out as wide as you can go (often 14mm) and shoot the whole scene.  This is a problem when it comes to getting fine detail in things like rocks, trees, and water.  This focal length tends be a little "softer" as far as crisp details of far away things.  This is not a focusing problem, but rather a physics problem of how the light bends through the aperture and diffracts through all the pieces of glass in the lens.  Zooming in helps to achieve more detail in the intricate pieces of stuff in the photo (being able to see the individual branches on trees far away versus a green and brown blob) because it's better to make a large image smaller instead of making a small image larger.  What intricate pieces of stuff am I worried about when photographing at night?  Stars, planets, nebulae, and galaxies!

I forgot to bring my remote shutter release which allows me to trigger the camera's shutter to take the picture without having to touch the camera.  Touching the camera introduces slight tremors which jiggle the sensor and lens which then cause the image to wobble around and not be as crisp.  So I had to hold down the shutter button for 2 minutes while I timed each exposure on my phone.  I locked down my camera tight to it's mount and hoped and prayed I would get usable images.  After each exposure I zoomed in to see if I introduced any shake during the exposure.  Some shots were very shaky, others were ok, and several had no apparent shake at all.  I got several panoramas that I could choose from in editing.

The rest of the trip was fairly uneventful.  I woke up the next morning, skipped sunrise because it wasn't terribly interesting (and because I was very tired), ate some cereal for breakfast, packed up, and hiked the 9 miles out.  It took me a couple days to find the time to edit the photos but I was very excited when I finally brought my images into the computer.  I had a beautiful blue hour shot of the canyon and the lake, and very clear and bright photos of the Milky Way with very little noise.  The next challenge was getting both shots to match in color temperature, tint, and exposure.  It took a couple hours of making teeny tiny adjustments and checking the colors against a neutral gray overlay to finally land on something I was happy with.  I enjoy editing as much as the shoot itself and I can sit down at the computer for hours at a time and be completely lost in artistic discovery.  Each photo has something to say and it's always going to be different from any other photo.  Spending time figuring that out is what makes editing so much fun for me.  I wanted to maintain a nighttime feel while providing enough detail in the foreground so you weren't just looking at a photo of the Milky Way hovering above a near-black landscape with a few lighter gray spots here and there.  I wanted to give a sense of a landscape lit by the light of a 100 billion stars, glowing 50,000 years away.  When we gaze into the Milky Way we are literally looking tens of thousands of years into the past.

Reflecting on the past in order to see our future.