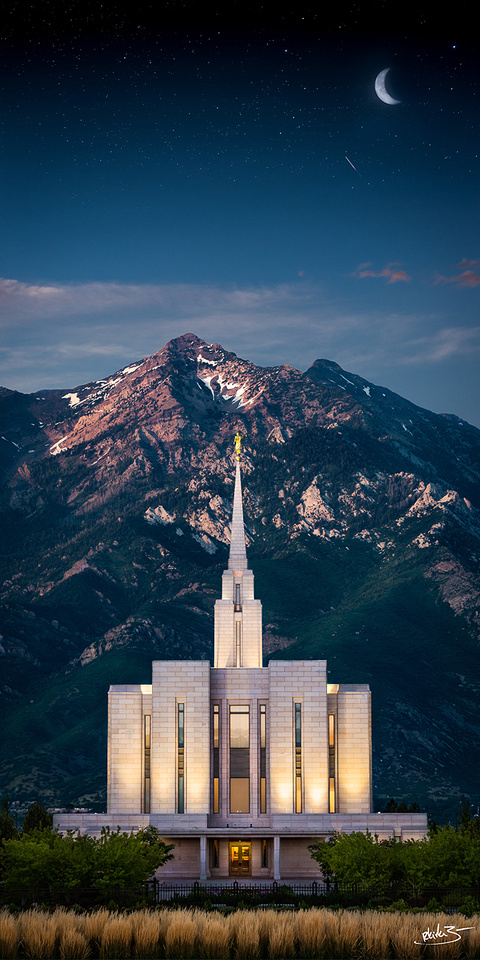 Since I moved to our new house in Herriman, I've driven on the Mountain View Corridor to get to work every day.  Every afternoon on my way home, I am presented with a magnificent juxtaposition of the Oquirrh Mountain Temple against the grand Wasatch Mountains.  I've heard many people who visit Salt Lake City say that our views of this mountain range are some of the best they've ever seen.  It is one of the reasons I love living in Salt Lake.

For a while now, probably the last 6 months or longer, I've been wanting to get a vertical panorama photograph of the temple in front of these mountains in such a way that showcases how rugged and grand they are.  But I wanted to go a step further and create the impossible.  I wanted to catch some stars appearing in dimming twilight sky.  Living in the metropolis of Salt Lake City does not make this possible.  I think we can see 7 or 8 stars in the night sky, maybe even 10 if there isn't much pollution.  So I would have to take this into my own hands and mix up a little magic.

It started out simply taking a photo of the mountains from in front of the temple, then slapping a previous image of the temple on top of it to see what it could look like.  This gave me a pretty good idea of what I could work with.  I've had this image in my mind and now saw it was possible to make it into reality.  With a couple clicks of the mouse, I was able to see that maybe I was onto something here.  My draft, in no way was it supposed to be an attempt at the real thing, came out looking...not terrible.  I wanted to include a moon in the sky for some added interest, creating a tangentially sci-fi image but still well grounded in reality.  My first attempt included a full moon that looked hilariously out of place.  My astronomer sister suggested a crescent moon instead.

Every year, for maybe a month or so, the Wasatch Mountains turn a lush green with all the rainfall in April and May.  The wild bushes and scrub produce these deep green leaves that make the mountains look almost like they could belong in Ireland.  I had to time my photography in order to get this greenery.  I also needed a somewhat clear sky so I wasn't messing with too many clouds.  But I didn't want a perfectly clear sky because that wouldn't be as interesting as having a few clouds.  So I waited.

And waited for the perfect evening.  The month of May gave us many, MANY evenings of rain and overcast skies.  Every night, after we put the kids to bed, I'd look out the window towards the mountains and think, "Nope, not today."  Finally, a warm spring evening created the perfect opportunity.  Partly cloudy, clear air, and a gorgeous sun setting on the distant mountains.  I grabbed my tripod and camera and headed out. I learned from my previous scouting trip that my 24-105mm lens was not going to cut it for the detail and realism I needed so I rented a 150-400mm lens for the evening.  This gave me an incredible reach and really nailed the details on the mountains.

I drove out to the temple and parked in front of it, across the road on the shoulder, and set up my tripod.  I snapped photos of the mountains as the sun light danced and faded until I had perfect light, right at the very last bit of sun still splashed over the horizon.  The color and drama shown on these mountain peaks was a sight to see.  Next, I packed up, drove behind the temple, and affixed my camera to my painter's pole with an attachment for screwing onto the tripod mount on the bottom of the camera.  I hoisted this up in the air about 16 feet and set a timer to take a few photos after a 20 second delay.  I did my best to level the camera, using the digital level and my flip down screen.  *Snap*Snap*Snap*Snap*Snap*  I checked them for clarity and sharpness, did one more run to be safe, and then packed up.

Editing this composite image ended up being the most complicated part of the process.  I had to blend together 5 separate images into seamless composition.  Some of these techniques were beyond me and I walked over to YouTube to watch a few "how to" videos on blending composite images.  Thankfully, there is a library of knowledge out there for free.  Anyone who wants to learn anything about photography or photo editing is just 2 clicks away.

My first draft wasn't great.  I sent it to my sister to critique because even though she isn't a photographer, she is able to articulate what looks good, doesn't look good, and come up with some reasons why.  With my second draft done, I gathered more feedback.  With my third draft done, I gathered even more feedback.  I was slowly carving away at this piece of marble to find the statue inside of it.  I worked on this image over the course of several days, noticing things later that I didn't see at first, and fixing them.

Eventually I finally reached this final image, of which I am very happy.  It gives me a sense of the grandeur of the mountains, the majesty of the Oquirrh Mtn Temple, and the mystery of the fading night sky.  Slightly sci-fi, but still real. The photograph of the mountain and the temple were taken within 20 minutes of each other and the stars and moon are from an eastern view of the sky with the moon being in the correct phase for the time the photo was taken.

I've been wanting to print out this image and hang it up on a large wall of our house.  I think I have the perfect spot for it.